This Report analyzes the data collected by the agro-meteorological stations and the agronomic surveys carried out in order to monitor and study the development of Fusarium responsible for the FHB.

The work is characterised by the following steps:

Comparing our data with the average rainfall for the month of June during the period 1993-2015 (valid data of the ARPAV), we verify a diversified rainfall trend. However, there is a decrease in precipitation in reference to the year 2016.

The average changes for the month of June 2018 are:

It is noted that in Porto Tolle, in the Po Delta area, the rainfall was about 40 mm, resulting to be the location with less rainfall while Mirano, followed closely by Castelbaldo, is the place where it rained the most: 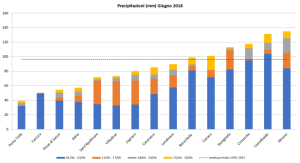 As well as for the temperature variation, we compared the average June temperatures of the period 1994-2017 the monthly average temperature of 2018. The comparing stations were chosen for their proximity with each one with the exception of Sant’Apollinare where we have our experimental fields and there is one ARPAV station.

The month of June seems to continue the trend of rising temperatures compared to the average of 1994-2017 as it emerged in the months of April and May 2018.

Table 4: SiGeCo DON data of the Temperature of the months of June 2018. Data collected from the stations of: Sant’Apollinare di Rovigo, Baruchella, Castelbaldo, Lendinara, Correzzola

Maintaining the same comparison method used for temperatures, it is found that Relative Humidity has a slight decrease.

Table 7: SiGeCo DON data of the average relative humidity of the months of June 2018 and May 2018. Data collected from the stations of: Sant’Apollinare di Rovigo, Baruchella, Castelbaldo, Lendinara, Correzzola

In the month of June, the wheat crops are in the phase of physiological maturation.

During field inspections, representative samples of the various plots were collected and rapid screening analyzes were carried out.

Despite the strong presence of fungi of Fusarium spp. the first analytical findings have revealed deoxynivalenol-DON levels from a few tens to a few hundred ppb, values that are largely within the limits regulated by law (1250 ppb for soft wheat and 1750 ppb for durum wheat).

In the experimental field of the Agricultural Institute “O. Munerati ” the samples of the various theses were collected manually with the three repetitions and also the samples artificially inoculated. The samples were delivered to the University of Padua where mycological and chemical analyzes will be performed. 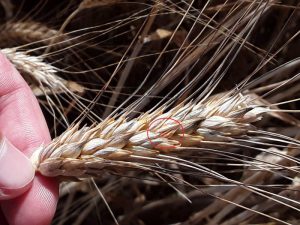